- Oktober 20, 2015
I wanna tell about one of my favorite character. I realized I love her for suddenly, before that... I just saw her as 'heroine', just 'heroine'. 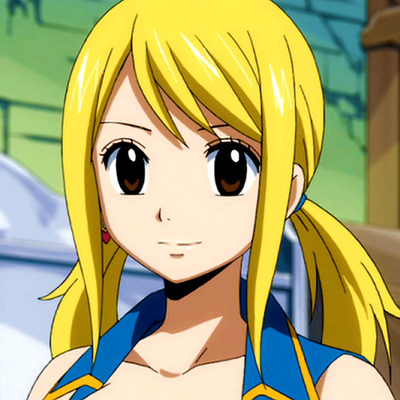 Lucy is a celestial mage like her mother, Layla Heartfilia. She used keys to call celestial friends such as Loki (Leo), Virgo, Aries, Taurus, until Aquarius (forget fact that Aquarius's key has broken). Their celestial have strength to help her in the fight or other need. So, the Lucy's fight style is together with the celestials.

Because she is new, she looked weak if we compare with the other mages in Fairy Tail (Natsu, Gray, Erza, Kana, Mirajane, etc). Once again, she is new and never fight before!

I am sad when many people said Lucy is just character for fanservice and talk her useless and weak.

I re-read Fairy Tail and I find Lucy is a character that growing step by step. Once again, from the beginning Fairy Tail, she is new mage! She wasn't strong yet.

Although that, we can see what's the part she took in each arc.

For example, in Lullaby arc. How can Natsu and etc knew the flute that Natsu saw was lullaby flute? 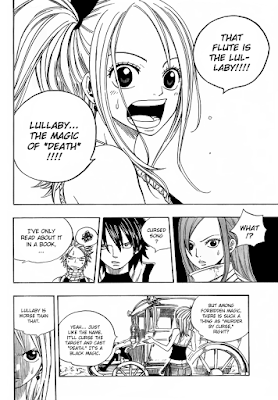 How if Lucy didn't there? Did Natsu and etc knew the danger of the flute?

It was because Lucy! She was smart, she loves read and book. She likes me, wanna be novelist :).

For the other arc, Galuna Island. Lucy fought with Sherry although it was funny when I read how the fight ended :).

Lucy could call the king of celestial, change one rule until Loki (Leo) could back to his real world. And for the seconds, all her celestial spirits appeared to give Lucy support. You know, calling one of celestial spirit need many energy, how about called all -Lucy's-?

And, I wonder, why did the king of celestial appear? Lucy was just new mage~ and the king mentioned Lucy as 'old friend'. 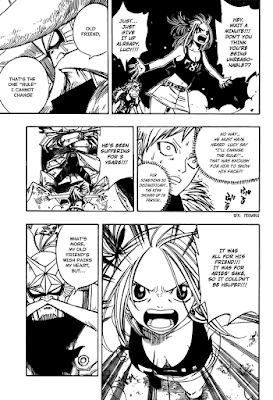 In Fantasia arc, Lucy and Loki have battle with bixlow and win. I laughed when I saw Gajeel's reaction. He never has idea that Lucy could fight. And... Natsu said, "I'm sure Lucy's pretty strong'. Besides Natsu, Erza has talked about 'Lucy is great' in Lullaby arc. She was strong, step by step. 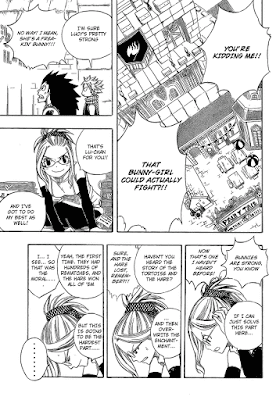 In the battle with Oracion Seis, Lucy won againts Angel. Before that, Hibiki from Blue Pegasus gave her information and knowledge about the magic that just Lucy could used to win. For the first time, Lucy had uranometria and beated Angel.

How can, the thing that you don't know before, you can using perfectly?

Once again I wonder, how can? who is Lucy actually?

But sometimes, Mashima-sensei made Lucy didn't look 'strong'. In the grand magic arc, Lucy vs Flare from Raven Tail, almost Lucy got the victory. She and gemini would used uranometria, but because Raven Tail's cheat, threatening Lucy using Asuka, Lucy was defeated. Natsu realized about it, he stopped Raven Tail, then he came to Lucy that cried, told her to saving the tears for the victory. If nothing cheat, Lucy would be a winner :), but... we can't look how care and gentle Natsu with her.

Many people -specially that hate Lucy- told that Lucy was a crybaby because this. I think it was natural if she cried, she was disappointed cause she lost. Once again, she could win if Raven Tail played fair!

And, in Eclipse arc. Who did close the eclipse gate so the dragons stopped to enter?

It's Lucy! Lucy and the celestial spirits!

How much the energy that Lucy (and Yukino) need to called all the celestial? Specially for Lucy, 10 of the celestial spirits came.

If Lucy didn't close the door, if future Lucy didn't through the time from future, the world in Fairy Tail crushed.

How can the gate crushed?

Natsu? Yes, because Natsu. But... how? It was mentioned in the diary of future Lucy. How can save the world, the way was with break down the eclipse gate. Lucy was smart, she found a solve!

And, Jellal have sense the power that similar with Zeref but not Zeref in the grand magic arc. You know who?

It was Lucy. The future Lucy. Lucy, the seven years after X791 has power like Zeref.

If the age of Zeref was 400 years old -the assumption that Natsu and the dragons have 400 years old-, why Natsu (and Gajeel) were grew normally? wendy too?

There are many secrets in Fairy Tail~

And, in Tartaros arc.

One and only that save in attack of Mard Geer was... Lucy Heartfilia. Mard Geer said it was lucky but I didn't think like that. Sure, there was a reason why just Lucy that save?

If Lucy didn't save, nothing Natsu and etc again.

Natsu said that he sure that Lucy saved them although until the latest chapter, nobody in Fairy Tail knew that Lucy sacrificed Aquarius. 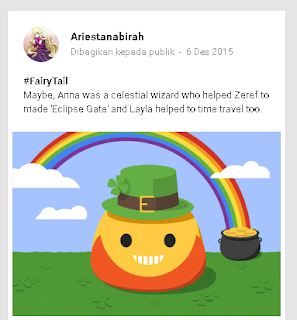 I'm happy cause my guess is right :). 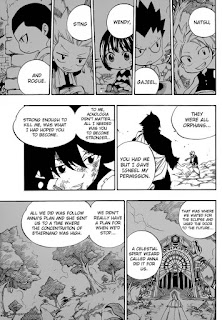 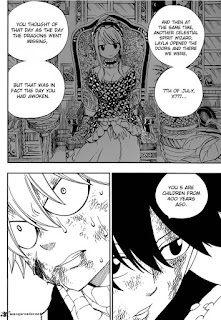 By the way, Lucy never meet Zeref until now. Mashima-sensei has said that Lucy will kneel down to Zeref, Zeref will give order to Lucy, Lucy will never to meet Natsu again after that.

Lucy knew about 'one magic' from Layla. Mavis and Hades said about one magic this too. The one magic is love.

Lucy said she was a legend heroine~, maybe.

And one thing again, 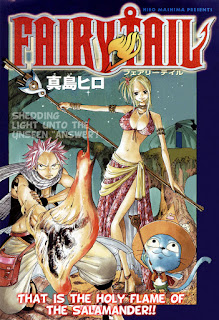 A stick that Lucy hold, what is that? I read assumption from Fairy Tail's fan, he/she told that Lucy maybe is Akh, the god that give curse to Zeref~ 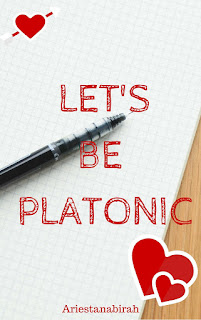